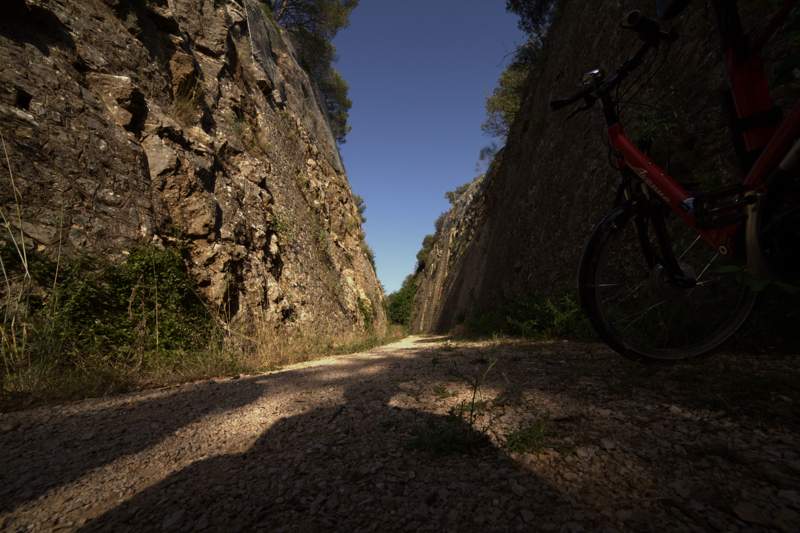 It is a rare and beautiful thing to ride a cycle route that is 100% traffic-free, wide enough to accommodate two chatty cycling friends side by side, with a wonderful smooth and well-maintained surface traversing diverse terrains, yet without any steep gradients to negotiate. Not to mention the vagaries of the weather. Even in the most cycle-friendly regions of the world, cyclists get to know how to make the best of often disconnected sections of better or poorer cycling infrastructure.

And so we turn to Provence, where cycling is still primarily a challenge sport rather than a means of transport. Bringing a cycleway to this area is something quite unique – the nearest existing cycleway before EV8 was started is 25 kilometres to the south, where a cycleway starts in the town of Trets and ends 12 kilometres farther west. So building a 180 kilometre long cycleway presents a lot of challenges, whether topographical, cultural, or financial. 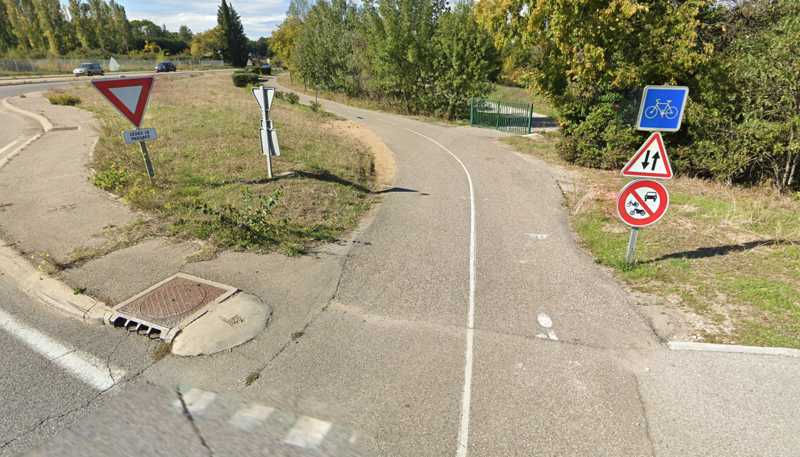 The cycleway at Trets

Meeting these challenges is the comité d’itinéraire de l’EuroVelo 8. Launched in 2015,  it covers the full 700 kilometres of EV8 in France. In that year, only 30% of those 700 kilometres were complete, most of which lie to the west in Languedoc-Roussillon. Work on the rest is ongoing, but due to a lack of financial support it is painfully slow. Meanwhile, anyone wishing to cycle sections of the EV8 here in Provence have a couple of options.

First, cyclists can follow the “official” route. Authorities across the French stretch of the EV8 have decided to create a provisional, signed route, using local roads as a means of connecting the existing sections of cycleway. These so-called “jalonnement” lead cyclists along quiet country lanes, but also onto the main, and often busy, departmental roads that the route follows.

Alternatively, cyclists can use local knowledge to find better alternatives. Like cyclists the world over, we have got to know little-used lanes and tracks that are more or less cyclable. But in the case of EV8, options are changing all the time, as new stretches are worked on or left partially finished. We have found that there are stretches of the future EV8, not yet sign-posted or officially opened, that can be used by cyclists willing to accept poor surfaces in exchange for a largely car-free experience. These are the local cyclist secrets we aim to share with you. Wherever there is such an alternative to the official route, we’ll try to give an objective assessment of its advantages and disadvantages.

In the end, and in the absence of the perfect cycleway, there is always a trade-off to be had between mixing with motor traffic on a smooth road, and cycling on rough surfaces without having to think about the next lorry or sports car overtaking you. Regarding motorised traffic, our ideal is complete separation. However, there are times when a small amount of local traffic is acceptable, provided their speed is limited, and hazards such as narrow tunnels are avoided. On the other hand, if the surface of the cycle route is designed only for cyclists, yet motorised vehicles use these stretches anyway, the finish quickly degrades and becomes unusable. Much of the new surfacing now being carried out comes into this category. A more “natural” finish of loose gravel on a thin layer of bitumen looks great to begin with, but as nature pushes up from below and cars, tractors and motorbikes break up from above, there is an urgent need for regular and costly maintenance.

Building and developing EV8 in Provence is an ongoing process which will take years to complete. As this work continues, our aim is to document these improvements and keep you informed of the current state of the 9 stretches of cycleway in our patch.