Eurovelo 8 is very much a work in progress. It is planned to run some 4500 kilometres on the European mainland, from Cadiz in Spain to Athens in Greece, and beyond to Cyprus and Turkey. But the “completion date” is unknown, making it difficult in places to identify the exact route.

Overviews of the whole route can be found here and there on the internet. There is also an official site dedicated to the 850km French section on francevelotourisme.com, which has some useful details about the various stretches between Spain and Italy.

Our site is dedicated to the 120 kilometre stretch which runs from Meyrargues in the west to Les Arcs in the east.  Each of these towns are accessible by regional trains which allow bicycles on board without prior booking. But in between are “provisional” sign-posted on-road sections, tracks intended to be part of the route in future, and some lengths that are completed. As work continues, we’ll try to keep you up to date.

Despite France having a comprehensive and fast train (TGV) network, taking your bike on a TGV requires a bit of research. The excellent freewheelingfrance website has a good overview of which regions of France have TGV trains that take fully assembled bikes. Unfortunately, Provence is not one of them. This should change in the future, as a new EU regulation obliges all railway companies to install at least 4 dedicated bicycle spaces in new and refurbished trains. But for now, if you want to reach Provence by train with your bike, you have two options. Either you disassemble the bike, pack it into a bike bag, and carry it on as luggage, or you find alternative train services that accommodate bicycles.

All regional trains (TER) allow passengers to bring bicycles on board without the need to book or pay extra. The faster Intercités trains are bookable and take bikes as well. Although the latter network is not as comprehensive as the TGV, it makes train travel with a bike more viable, especially using their night trains.

With all this in mind, two routes are possible from northern Europe – via Paris, or via Geneva. From Paris, you can take the 4-a-day direct TER service from Paris Bercy to Lyon (5 hours), and another TER service from Lyon to Avignon (2 hours 30 minutes) or Marseille (another hour). Alternatively, there are TGV and Intercités services to Toulouse that take bicycles, 6 per day plus one overnight service. The TGV services take around 4hours 30 minutes, whilst the Intercités take around 7 hours. From Toulouse, there are 6 direct Intercités per day to Marseille, taking just under 4 hours. From Marseille you can reach Meyrargues, Les Arcs and Cannes using local TER services.

From Geneva, there are direct regional trains to Grenoble (6 a day on weekdays, 2 hours 20 minutes). From Grenoble you can take the TER on to Valence (just over an hour) and connect  to Avignon using the Lyon train (1 hour 20 minutes). There is also a train link from Grenoble to Meyrargues  via Veynes-Devoluy, but this is partially closed until well into 2022 due to repair works. The alternative bus service does not carry bicycles.

If you are cycling all the way from the north using the European cycle network, you will most likely be arriving in Provence on the ViaRhona cycleway. To access EV8 in Provence from there, the closest connection is at Avignon.

Getting to Meyrargues is possible, if not ideal, by bicycle from Avignon. The EV8 route passes through Cavaillon, 26 kilometres south east of Avignon, though there is no designated cycle route, so we’ll be researching this stretch in a future article. From Cavaillon you can take the EV8 to Manosque, where it is recommended, due to lack of safe infrastructure, to take a train to Meyrargues. 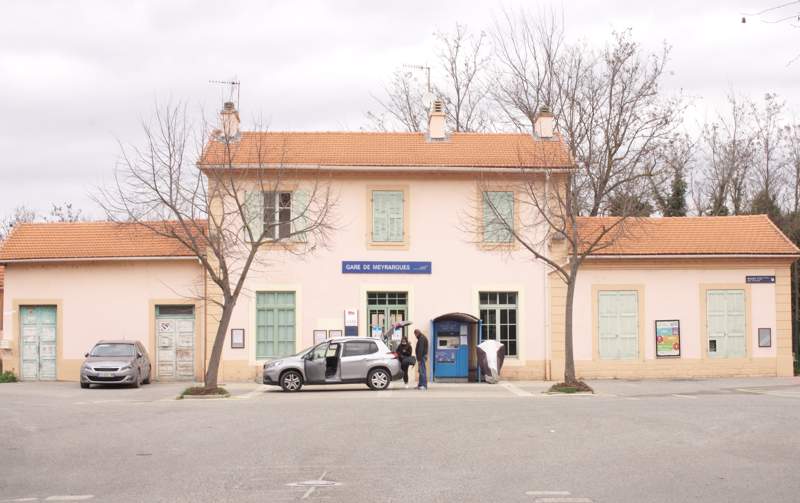 Meyrargues to Les Arcs in 7 Stages

Broadly, the EV8 from Meyrargues to Les Arcs can be divided into 7 stretches. The first 20 kilometres, from Meyrargues station (above) to Rians involves a pleasant ride alongside an EDF canal, followed by a series of alternating stretches of main road and small side roads as the EV8 passes through the village of Juques. The departmental border, at the Aquaduc de Saint Bachi, is a pinch point for the EV8, where an innovative solution needs to be found. Beyond, the route follows the old railway line for much of the 5 kilometres to Rians.

The second stretch, 18 kilometres from Rians to Varages, includes substantial cycling on the route of the old railway line, though much of it still needs to be resurfaced.

The third stretch, 9 kilometres from Varages to Pontevès, can be done on the old railway line route, but here surface work is ongoing, and requires solid tyres for an extremely bumpy ride. The alternative signed route is 2 kilometres longer and involves using the busy D554.

The fourth stretch, 20 kilometres from Pontevès to Salernes, is largely completed, though not yet officially opened. There are a couple of short stretches where the main road has to be used, but otherwise most of this section is on the dedicated cycleway created from the old railway line.

The fifth stretch, 31 kilometres from Salernes to Flayosc, is an officially opened section, though some parts are shared with local motor traffic. As the official French site notes :

“Before Flayosc there’s a series of short tunnels for which you need to put on your lights. Note that you may encounter some motorized traffic coming in the opposite direction in these tunnels.”

Stretch six (8 kilometres) leads us into Draguignan. After the officially opened section ends, the EV8 takes a steep descent into the town centre on small side roads.

The seventh section is on the 11 kilometre long Voie de Vigne cycleway to Les Arcs-sur-Argens railway station. The cycleway starts from south of the the old Draguignan railway station, now the town’s bus station. Les Arcs is a TGV railway station that has both regional trains to Marseille and Nice, as well as long-distance trains, including the Strasbourg connection mentioned above.

Finally, we also have some details of the 48 kilometre-long stretch to the east of Draguignan, which is partly finished, taking cyclists to the site of the old Gustav Eiffel viaduct over the river Siagne (below), sadly destroyed during World War 2..